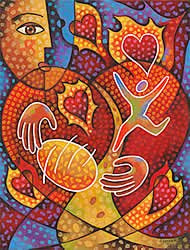 So i'm actually looking forward to going to the Hearts on Fire conference in San Francisco on July 3-6th. That's significant (for me) because I've pretty much been conferenced out the past several years. That's not to say that I haven't gone to any in recent years - just that I've gone to so many conferences - different types of conferences over the past 15 years.

There are some things, however, that I'm looking forward to for the Hearts on Fire conference . . . .

It'll be interesting for me to see a glimpse into the Lutheran culture. That kinda sounds weird but this is a Lutherans Concerned conference which means the majority of people there will be Lutherans. But ever since meeting Ross at the last GCN conference in January, I've been interested to know more about their inner workings. That's significant too because i'm pretty much an "un-structure" guy - especially when it comes to church governance. But Ross has a way of making it all sound interesting. I'm looking forward to seeing him too because I've always found him refreshing.

I'm also interested in hearing and hopefully meeting and talking with Rt. Rev. V. Gene Robinson, the openly gay Episcopal Bishop of New Hampshire. Now, i'm NOT one to be impressed and in awe of celebrity christians or conference speakers (Lord knows, I've seen enough of that at Christian conferences), it's just that I'd like to hear what he has to say and possibly talk to him about some of the Hot Zone things happening here in Long Beach. We're approaching the time when we'll start gathering pastors here to talk about the very controversial issue of gays in the Church. I wonder what it would take to get him here in Long Beach to talk with some folks? Ooh, that would flare things up in the Hot Zone all right!

I'm curious to see what kind of buzz there is in San Francisco regarding marriage equality. By then, it will have been officially legal in California and SF is a major hub for this. Hmm, I just had a thought - perhaps I can arrange to meet and video tape stories of some who got married.

I'm also looking forward to making some new friends that I can stay connected with. It looks like we're in the dorms at San Francisco University so I'm sure I'll get to meet some interesting people. It'll be good to see and hear from Kelly Fryer (of A Renewal Enterprise) again who I first saw at the GCN conference then met in Chicago this past March as she facilitated a vision-development process for GCN's leaders. I'm learning much from her for our work with the new Catalyst.

I'm particularly approaching this conference with the hope of speaking with and hearing from the Lord regarding our own relationship with each other. I'm looking forward to a refreshing time!

If anyone is at all interested in the conference, they may be able to squeeze a few more people in to register. You might be able to inquire about day-passes or if they had cancellations.

So anyway, i'm sure it'll be a good time.

Yes! You can do it ALL at Hearts on Fire. Who knows? You might be Lutheran by the time you leave.