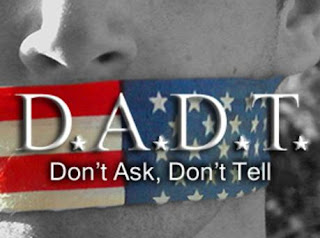 I've been increasingly disappointed with President Barack Obama lately, particularly because he appealed the federal court ruling that Don't Ask Don't Tell is unconstitutional. I was hopeful, like many, that his Presidency would be a catalyst for justice for LGBT americans. And at first I was patient with the delays and his ever constant excuse that he prefers that change happen via Congress.

But here's my thing. When a federal court judge determines that a policy is unconstitutional - aka unjust and contrary to the values document of our country, and then to make an appeal against such a ruling - to me, that's a very intentional decision to support the continuation of injustice and inequality.

Seriously, how many judges (who by the way, it's their JOB to be objective and impartial) across the country at various levels of government need to rule that something is wrong before people keep asserting that they'd prefer to have Congress (who by the way, are by nature partisan and partial) or even the general population make a vote saying that something is wrong. It's stupid. To me, it has nothing to do with legal process and how something becomes law and how it's better that there's broad public support for something becoming law. If it's wrong, it's wrong. If it's unjust, it's unjust. The very function of a judge is to determine that! And if the President 'claims' that he supports repealing the policy anyway, well then I think it's a total cop-out to pass the buck and say well if all of those people agree, then we'll repeal it. Nevermind a judge.

I'm disappointed because when I voted for him, I had hoped for a leader.

Every time a judge says that discriminating against gays and lesbians is wrong, and then someone else steps in to say, 'Wait a minute! Let's vote on that!' or 'Let's ask someone else about that!' or worse even 'If it's wrong, let's change the constitution so that we can keep doing it!', every time that happens, it further communicates to not only our youth but to everyone else that it's okay to discriminate and treat certain people differently. That's bullying.

So now, with the media attention around teen suicides and anti-gay bullying, and the popular It Gets Better campaign, now the President has the nerve to do an It Gets Better video saying that it's not your fault and that you should reach out to those who support you. I find this highly hypocritical because he fails to realize that Don't Ask Don't Tell and all kinds of other anti-gay discriminatory laws ARE ALL WAYS THAT ENABLE PEOPLE TO BULLY GAY PEOPLE.

Really. And so to intentionally make an appeal of the court's ruling that something is wrong, so that once again, openly gay American soldiers can be bullied into staying in the closet or getting kicked out of the military, well that's just disappointing and frustrating.

Here's what I think. If the Commander-in-Chief ORDERS the military to STOP doing something as simple as treating openly gay and lesbian soldiers/people differently, and instead to treat everyone equally and with respect, regardless of how they may personally feel about such an order, then I believe that our military is capable of following those orders, even in a time of war. It's a cop-out to say that we need to study the impact on military readiness from such a repeal. They'll be ready no matter what.

Since when did military commanders NOT give an order until first they took a poll to see if the troops would like the order or not? That's absurd.

It's not like I think, at the time of the last election, that the alternative would have been any better on this subject. But still, it's disappointing. And i'm not sure he'd have my vote again.

I'd rather have voted for Michelle Obama. Now her - I still love!

But as for President Obama - if it really does get better, then ARE YOU going to help make it better?
Posted by Eric at 2:04 PM 5 comments:

Ending the Ban on Gays in the Military

Haha, yeah I know it's been 9 months since my last blog post! While I've kept quite busy with fun and exciting things with Catalyst, a part of me still misses blogging - to process my thoughts on what ever it is I'm thinking about. I wish I had the time to do it more!

I decided to write today because I've been reading about recent and yet long overdue attempts to repeal the ban on "Don't Ask, Don't Tell" and I had some initial reactions. In a nutshell, I've gathered that opponents to the repeal are concerned about how the ban would effect military life and readiness.

Who do you think we are? Do gay people cause such sexual chaos that without any formal regulations, we would be free to f*ck anything and everything that moves? If you remove the leash, we'll be like dogs? Even in battle? Even when there is an important job to do?

Consider how offensive that "concern" is. At the very core, "Don't Ask, Don't Tell" is not about protecting good order. It is more about preserving prejudice than correcting injustice. The "concern" reveals that they would rather assume that gay people are sexual deviants instead of assuming that our military men and women already are people of order and discipline - whether gay or straight.

It is the ban that jeopardizes good order and discipline because it perpetuates an unhealthy, unrealistic, and unfounded fear in its own people. It creates the doubt.

The fear and concern about how our presence will effect others is counterproductive. Because all of those fears and concerns happen with straight people - and perhaps even more.

Do straight men and women serving in the same unit jeopardize military life and readiness?

The fact is that gay men and women are often leaders. Many of us strive towards excellence. We are good at what we do. My theory is that since growing up in the closet can sometimes make us feel inadequate and unacknowledged and that being gay is not in our control, many of us compensate (perhaps even over-compensate) by working even harder than others to achieve things because that is in our control. We can't choose to be gay. But we can choose what we do - to succeed, to excel, to be fabulous!

Either way, we need gay people to be gay people because the experience of being gay and (for many of us) growing up in the closet makes us thoughtful, innovative, creative, and empathetic leaders in our society.

People should be proud to have us among their corps.
Posted by Eric at 10:36 AM 4 comments: