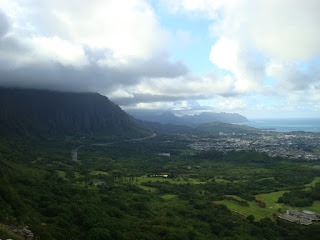 My last day at the North Shore was spent geocaching!

I first navigated my way to where I had been snorkeling the day before and found an easy "cache & dash" near a power line. It was in a black plastic cylinder casing. I logged my name and moved on.

I decided to take a quick break to see what the Hawaiian Sea Turtles were up to so I went back to their beach and saw about 7-8 of them near the shore swimming around and feeding.

I navigated my way to the next geocache which took me a good 45 minutes to find. It was just outside the entrance to Waimea Valley and there was a cool duck that decided to be my geocaching buddy. He kept following me around as I roamed back and forth trying to find the proper coordinates. I finally found the cache in a small cave-like cubby hole surrounded by plants and greenery. There were a few cool things that people left behind - keychains and such. I left behind a Catalyst flyer, logged my name, and moved on.

The third cache of the day took me on about a half mile hike along the Bay. This one was very difficult to find! It's considered a micro cache which means it's really small. I even enlisted the help of a cool couple that I met and talked with that lived there on the island. He had heard of geocaching and had never really done it before so he was happy to join in the hunt. Actually he was the one who found it! After about an hour of hunting around for this thing (and also pissing off a homeless guy trying to get his post lunch nap in) we found the cache in a small black 35mm film case. We both logged our names in and I'm sure he's now hooked on geocaching!

I hiked back to my car and took a drive around the perimeter of the island clockwise - saw the rest of the North Shore, then followed Kamehameha Hwy down the east shore of Oahu.

Then I went to go find a well known lookout called Nu'uanu Pali lookout. This was the site of King Kamehameha's victory on Oahu against the warriors of Maui. An estimated 400 warriors died in the battle. This lookout was where the men were forced off the cliff! Talk about craziness! This final battle at Nu'uanu Pali on Oahu led to Kamehameha's victory of becoming King over all the Hawaiian Islands. It's funny how history really is written by the victors.... it's said that he wanted to unite the islands because all the tribes and islands were separate. I'm sure it wasn't because he wanted to be king of all. Hmm..... no disrespect though. Hawaiians have a proud history about it all and in the end, a united Island nation made the people stronger - especially when the Europeans, Westerners and other Island tribes (Tahiti, Samoa, etc.) negotiated trade.

Nevertheless, it's an amazing lookout!

After my trek around the island and overlooking it, I went back to Waikiki to have dinner with my dad and some of his friends. It was really cool meeting them and seeing how they all interacted. Wow, I hung out with my dad's gay friends today!

Check out photos of the day here!
Posted by Eric at 11:32 PM

Email ThisBlogThis!Share to TwitterShare to FacebookShare to Pinterest
Labels: trips

Eric, you met so many people on your trip! And I'm sure you brightened all of their days. ('cept maybe that homeless guy)