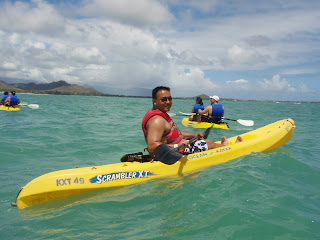 After spending three days on the Big Island, I flew back to Honolulu on Oahu and stayed the night with my dad in Waikiki.

For my last day on the islands, I really wanted to snorkel one last time and go kayaking for the first time (since I missed doing these things when I went on my spontaneous adventure through a Hawaiian jungle in the Waipi'o Valley!). So I got up early and made my way to Kailua Beach to spend the day in the sun and water.

I didn't have a set plan - just that I'd rent snorkel stuff then later rent a kayak. Both would have cost some cash but it turned out that there was an opening for a guided kayak tour around the bay, then afterwards use of snorkeling gear was included (along with lunch). So it turned out to be a great deal!

We had a really cute kayak guide named Andy who was actually a really cool guy. He is from Delaware but had just moved to the island about six months ago. Talk about a great job! He gave us a lil orientation on the kayak and paddling then we took them out to the water.

This was my first time kayaking and I had so much fun! Actually, it wasn't that difficult and I figured it'd be easy to tip over but in my experience it was pretty sturdy. It was a great upper body work out too and Andy says that "I'm not too shaby!" *blush* lol

We took the kayaks out around the bay then landed onto Flat Island where Andy took us on a tour to see the protected bird life there. This island was unique in that it's the only island not formed out of volcanic activity. It's actually more coral reef. So the whole coral island was really pretty interesting. (or is it that Andy made it interesting! *fawn* lol)

After spending a couple hours kayaking, I had lunch and met a nice older married couple from Canada. She highly recommended this place called Prince Edward Island which I'd love to check out for myself one day. Stay tuned for Eric's Canadian Adventures!

Andy recommended a sweet snorkeling spot so I made my way to that part of the bay and went out in the water. While snorkeling, I spotted a turtle! So I followed (more like harassed) the turtle taking photos and video. Be sure to check out the video in my Facebook page!

Since it was my last day in Hawaii, I decided to just lounge around on the beach, enjoy the day, and lay out for a bit. It's not that I really *needed* a tan, but I got one all the same. While laying out, I met this cute cool guy named Tim and we ended up talking for a couple hours both in the water and on the beach. He had just moved to the island a week prior and will be there for a year. He's a civilian that works with the Air Force as an engineer. He's from Rhode Island (and had this cute accent).

I really did not want to leave! But I stretched out my time as long as possible and so I said my good byes to Tim, the Hawaiian beaches, waves and sand, and made my way back to Waikiki to say good bye to my dad.

By the time I returned the rental car and got to the airport, I missed my flight! Fortunately, I scored an alternative flight which was a direct flight to Los Angeles. My other flight would have had my layover in Dallas/Fort Worth. That was a sweet deal!

And for a grand farewell from the Hawaiian Islands, there was a musical group and a guy/girl pair doing hula for airport travelers.

All in all, this was an amazing vacation that gave me some wonderful adventures!

Check out photos of the day here!
Posted by Eric at 11:33 PM

Email ThisBlogThis!Share to TwitterShare to FacebookShare to Pinterest
Labels: trips