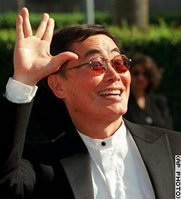 George Takei is gay. You know, that guy from the original Star Trek series with everyone in way too tight Star Fleet uniforms - Sulu. The asian guy. Yeah, apparently he's gay. A good friend of mine pointed out the article to me.

I would have never thought he was gay. I know, i know, there are some out there saying, "Duh!" But i have always referred to my "gay-dar" as pretty weak. I can't normally determine if someone is gay because, quite frankly, I haven't spent a whole lot of time around gay people except these past 5-6 months. Among my friends, i refer to my "gay-dar" as merely sonar. I can pick up what's on the surface. I'll send out a wave and a bleep will sound just to tell me something is out there. Some of my other friends, on the other hand, have much more advanced detection systems than I do. Some of my friends have X-ray detection technology that will enable them to point out every gay person in the crowd. Yet, I have other friends that have infrared detection technology that allows them to point out the closet cases. They have the super power of being able to see deep into a person's soul. (Okay, maybe not that extreme nor mystical - i know, only God sees all).

As i read the article, the striking thing for me wasn't that he is gay. Rather, it was the reference to him living in a U.S. internment camp for Japanese from ages 4 through 8 and growing up ashamed of his ethnicity and sexuality. That's the part that hits home for me because I've always had "issues" and "baggage" about my ethnicity. I left the Philippines at the age of about 3 years old because my dad was in the Air Force. We were in Illinois, then ended up in Hawaii. I'm pretty much "americanized" and don't feel much attachment to my ethnic heritage (but i can make a good chicken adobo though!). Anyway, after my parents divorced, I moved with my mom to Southern California.

At that time, everything was new to me. It was a new place to live. It was a new family arrangement. I hadn't made friends yet. I was feeling weird about the divorce. I was feeling somewhat rejected by my dad for "choosing" my mom. Plus, there was the awkwardness of knowing I was gay and entering junior high school (I knew I was gay since 3rd grade). One day, I was walking down the street and a white pick up truck with two caucasian guys drove by and yelled out, "Chink chink!" I was devastated. How the hell do I respond to that?

I can trace my own personal ethnic shame back to that moment in 7th grade. I hated the fact that I wasn't caucasian. I always felt different. In those early years, what I wanted most was to be accepted and wanted. Sure, there's that parallel of my sexuality too. However, many times, it was harder for me to accept my ethnicity than it was to accept my sexuality. I can hide being gay. I can dismiss my sexuality as sin or confusion or brokenness or whatever. But I can't dismiss my ethnicity. It stares me right in the face when I look in the mirror. There's no hiding from it - even basic sonar can reveal that I'm filipino. I'm filipino. Wow, it took a long time for me to be able to say that. I didn't even like to categorize myself on applications as "Asian" because I was ashamed of it.

So you can imagine, that when it comes to attraction, i've always been less attracted to "asian" guys (because I saw myself in them) and was more attracted to caucasian guys, perhaps because I wanted to be like them. It's way weird for me to hear that there are some caucasian guys out there that like asian guys. Yeah, I know, it sounds sad to see oneself that way but that was the reality of my shame. In theory and in conversation, ethnicity shouldn't be a pressing issue when it comes to relationships but that's a reality for some of us who feel rejected because of it. So couple that with the issues with my sexuality, plus my feelings of family rejection after the divorce, and it sets the stage for the day I tried to kill myself in 9th grade. I'm thankful that God wasn't done with me yet.
Posted by Eric at 10:37 AM

Weird thought from that... Um, I'm Caucasian, and I've always wanted to be a Filipino gal. Interesting flip of the race card, isn't it?

Hi my dear friend, I can TOTALLY relate. I am a bi European American woman who is divorcing her homophobic African American husband and who has 5 year old daughter.
I first had oral sex at the age of 7. I have known I was attracted to boys since the age of 6, when I started chasing them.
Funny how our early experiences shape us, eh?
I appreciate your honesty.
It is our generation that enables us to be this honest. Thank God for Generation X! I shock many baby boomers with my honesty. Oh well.
Thanks for being here Eric, you console my broken heart.
Regards
Oly

Thank you for this post. It's good to read a story that puts my perspective "outside the box". Hang in there, too.

Speaking as someone of mixed race who inherited almost none of my mother's caucasian features (and whose parents are divorced), I can relate pretty well to everything you said.

When I was very young my grandfather Fastino, who is also from the Philippines, feed me rice and I instantly became a carbohydrate addict. In spite of it all, it was a happy childhood until I was old enough to understand racial prejudges. I was around nine or ten at the time. I’m very glad my parents didn’t live in south Texas; bigotry towards Latinos was exasperating during the twentieth century.

I have some idea of what it is to be caught between two worlds. My birth certificate lists me as Caucasian. However, I was very fortunate enough to learn and appreciated my Mexican heritage. At the same time I could never connect with kids who were very ethic in school. My mother insisted on English only instruction not bi-lingual and very gratified she did. Most of the kids in bi-lingual education usually never make it out of the cultural gutter, very sad.

At work there are some ethnic Mexican co-workers that are surprised I can speak Spanish. This is what I have to live with from time to time along with my brothers. All of my siblings have non-ethnic Mexican friends for the most part. It’s because we’re so Americanized. I did have a time of self-loathing for not being white, that’s behind me now.

There is no desire or motivation for me to visit my ancestral country. All of my relatives live north of the border. The one thing I have that kept me going throughout my life is my Mom. Without her support and prayers I would have never graduated college or entered into relationship with Jesus.

The former newscaster Tom Brokaw wrote a book called “America’s Greatest Generation”. My family’s greatest generation is my Mothers. She and her siblings immigrated to the United States, worked and sacrificed for the sake of their children.

I have everything to be grateful to our Father in Heaven and nothing to complaint about!

Personally I have never felt at home around most european people and have generaly hung around with Filipino's and chinese.

Having said that - most people must not feel that way because there are such things as ethnic groups for me to be the odd man out in!

Anyway asian women are more feminine looking (I think) and I guess white men are more masculine. Maybe that has somthing to do with it.