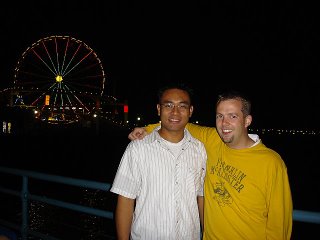 So he came out to the LA area last week with family and we got to spend some time. We went to Santa Monica's Third Street Promenade and watched the kewl street performers (jugglers and dancers), had a delicious Italian dinner, walked out to the pier and got an ice cream cone, then sat at the end of the pier chatting and listening to a really interesting spanish speaking musician. Since neither of us understood what he was saying, we took turns filling in the lyrics ourselves with what we imagined he was singing about. We walked back past midnight and a guy passing by gave him a red and yellow flower. He smiled and gave it to me. Awww . . . what a sweetheart! Anyway, he said that it was okay to put his pic up on TWC - I forgot to ask him if I can use his real name so for now I'll refer to him as my visiting friend. He's a cutie, huh?

Some of the things we particularly related with was our paradigm regarding the "Church". He connected with "Jumping The Walls" and "Band of Brothers and Sisters". . . .

I was *this* close to writing another blog post last night about my paradigm of "Church". The inspiration was there but I wasn't yet ready to articulate them yet. That typically means i'm still chewing on it and so it'll probably come out of me later.

I mentioned before that I'll be teaching a workshop at a conference that a local inclusive church is hosting in September. The workshop will be discussing relational/"oikos" evangelism which in a nutshell is basically living a lifestyle of faith in the context of loving God, loving others (two Greatest Commandments) and inspiring others to do the same (Great Commission). Part of that will be about living in "community" as the Church. After the conference, I'll be leading/hosting a home group meant to train and equip people to live these things out. I'm looking forward to that.

[If you'd like to see other posts about my paradigm of Church, try "Church Outside The Box" or some of the other posts in that section in the right column.] 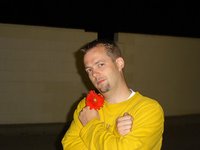 Anyway, it was so good to finally meet my visiting friend. We've got tons in common and he always makes me laugh and/or smile. I'm definitely hoping to visit him in Grand Rapids some time next year. He's got an awesome home and has 11 ducks. He said once that he noticed that we always have BBQ's here in Long Beach so we're gonna have a BBQ at his place. No, we won't BBQ the cute ducks!

He's also good friends with Becky - (that triathlete that I've mentioned before - the one who competed in the Gay Games). She also lives in Grand Rapids so it'll be fun to see her too! Actually, Becky is wanting to move out here to 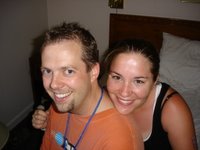 Southern California so when I went to the gym today (yes! i finally got back to the gym - had a good work out by the way) I inquired on her behalf about personal trainer positions. Becky and I are starting a campaign to convince our friend to move out here to So Cal too. I think it would be so awesome to live out "community" with each other - especially since all three of us share the same paradigm about "being the Church".

Hey Eric-All I can do is smile. I love you.