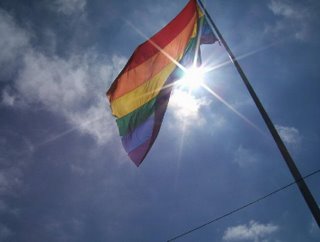 So my laptop got fried last night.

Nutshell version of the story: laptop was plugged in at coffee shop, blender went on, power surge, laptop shut down, now windows won't start up. You know what that means? Lost lots of pics (including the SF trip ones), lost all those software applications that i no longer have the CD's for (including photoshop CS and that whole Adobe Acrobat suite thing that let me make PDFs), and lost all my music that i had in my iTunes.

Sigh. I'm not horribly mad about it. It's no ones fault.

Fortunately, i had already put up the new FilmLoop on this site (top right corner of this blog - what do you think?) and so at least i still have some of those photos that i can resave to my desktop. Plus, i had been posting loads of pics from the SF trip over at the GCN photo gallery - so i can also resave those to my desktop. I don't think i can do anything about losing the software but at least I have the music that's already on my iPod.

So, with all that said, i'm concluding my series of posts on my San Francisco Labor Day Trip. Thankfully, i can still include a few pics of my last days . . . . 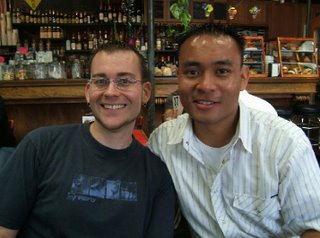 So Michael and I started Day 4 of our trip early and sleep deprived. We got to bed around 4 a.m. and we got up around 7:30 a.m. or so. The first thing on our itinerary was to meet up with Christopher, an awesome guy who is also a TWC reader. He's got his own blog called "Bending The Rule". He's a seminary student working on his doctoral degree. Christopher is Episcopalian and his parter (who he met at seminary too!) is a Lutheran pastor. So he had some really good insight to offer Michael and I.

The three of us met for breakfast and coffee at Cafe Flore in Castro. Michael has been doing alot of reading and research as part of his own personal journey of exploring colliding worlds so he and Christopher had some very interesting conversation about various authors who have had thoughts about the whole gay Christian thing. Christopher and I also had some very interesting conversation about the Church and community. After breakfast and our dialogue, Christopher was kind enough to walk us to our next destination - St. Francis Lutheran Church. I respected the fact that he didn't do the whole Churchian thing by encouraging us to go to "his" church while knowing that we were about to go to "another" church. It didn't matter to him whether or not we went to Sunday service at his or someone else's church. He knows that we are all part of the Body of Christ. A pet-peeve of mine is that whole church competitiveness thing. It's good to talk to another believer - a brother - who also shares a paradigm of Christ's Church that extends beyond a local fellowship's four walls. Kudos to Christopher! And blessings too . . . . 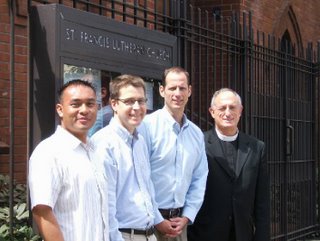 So after saying our good-bye's and glad-to-have-met-you's with Christopher, Michael and I met Stephen. Stephen is also a TWC reader and has his own Web site over at Globality.org. He's the guy with the glasses standing next to me in the photo. Stephen also introduced us to people at his church fellowship - St. Francis Lutheran Church. Next to him in the photo is Grant, the congregation's President, and next to him is Pastor Robert on the end.

St. Francis had a very liturgical style expression of worship in their service. It was structured and orderly and I found it to be completely refreshing! Keep in mind, that i'm typically accustomed to a service that most resembles a non-denominational type of worship expression. And so to be able to worship in a liturgical service provided me a perspective to the order of God. I really sensed the Spirit's presence among these worshippers. I've attended liturgical style services before so this wasn't new to me. But since it's not my norm, I was able to appreciate it all the more.

In much of my experience with talking to people of different denominations, i've found that there are many that fail to speak honorably and respectfully about their brothers and sisters within God's Church that worship differently than they do. I think it's a shame and I think God's heart breaks because of the sibling rivalry within His Family. We ought to value each of our differences - especially the diversity in which we express our worship to Him. If you are regularly a part of a church that is more demonstrative, I encourage you to visit a church that has a more structured and liturgical service. If you are a part of a traditional type of church, I encourage you to visit a church that expresses a fluid worship. I think there is value is exploring different ways of worshipping the Lord. I believe that we begin to understand the diversity of God's love when we begin to appreciate the diversity of other believers. Then perhaps the Church can begin to conceive of the notion that God would dare to love those gay people!

After the service at St. Francis, Michael and I joined Stephen, Grant, and Pastor Robert for lunch next door. I found our conversation to be refreshing because they are all very open to investing in relationships both within their congregation and also within their city. I shared with them many of my thoughts about the Church and our approach to living out the Great Commission and they seemed to receive it well. I'd love to visit with them again to talk with them more! In the mean time, I extend a blessing to our brothers and sisters at St. Francis in San Francisco!

By mid afternoon, Michael and I were exhausted! We returned to the hotel where Michael took a long nap and I took a brief one. I was going to be meeting up again with Mark Andrew and Edison and we were all going to check out the Harrison Street Fair. No i'm not into the whole leather or bear thing. But one of the reasons why I wanted to go was to be able to make observations about this segment of the GLBT culture. I did take photos at the fair and I was planning to share a couple with you but I didn't put any in the FilmLoop and so I've got no other copies. They were all fried with the laptop! Nevertheless, it was interesting to watch. As we passed by one of the booths, I ended up seeing a fellow Long Beach-ian. It was one of the owners of a popular coffee shop that I often hang out at called Hot Java. That was kewl!

We stayed at the fair for about an hour, then we took the Muni (bus) back to the hotel to meet back up with Michael (who got to take a nice long nap!). Then the four of us drove over to Mark Andrew's church fellowship called Freedom In Christ. The flavor of worship for them was somewhere in between non-denominational and pentecostal/charismatic. It was a fun and worshipful service. Very different from the service we experienced earlier that day, but still very God-honoring and worshipful.

What I noticed from the day's range of activities was that even within all three groups (Episcopalian, Lutheran, Pentecostal), all were Christ-centered in their message. All spoke of the salvation that comes through Christ. All honored and worshipped Jesus. All are gay. 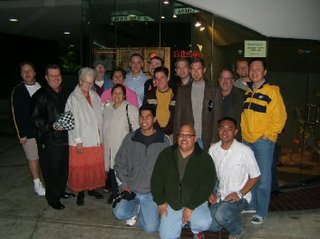 So after the evening service at Freedom In Christ, a large group of us went out to dinner to a restaurant. Our group was so big that they had to separate us into three groups in order to seat all of us. It was fun either way because we got to chat with different people.

By the end of dinner, we were ready to call it a night. It was Sunday and the next day would be our last before returning home.

So on Day 5 of our trip, Michael and I went in search for his old Elementary school. He grew up in SF during his early years. We found the school and we spent some time peeking through windows, going through the playground (accessible to the public), and Michael reminisced about times of being a kid (and also punking some kids around - he was a meany bully hooligan! nah- just kidding). Too bad I lost the photos of this part of the trip. =(

We drove back to the hotel to meet up again with Mark Andrew and Edison. We were going to do the switch off - Michael would take Edison and the two of them would drive back down to Santa Barbara (where Michael lives) and Edison would take the train from there to Los Angeles. I wasn't going to be flying out until 8:30pm that night so Mark Andrew and I decided to have lunch and spend the afternoon at Golden Gate Park. 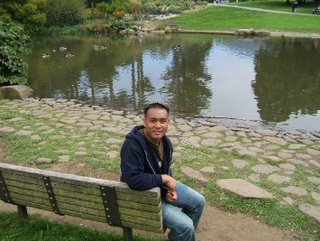 This was great because that was the last thing on my list of things I wanted to do while in SF and I thought we wouldn't be able to fit it in. Michael missed out on it but I got to go and hang out there with Mark Andrew. We went to this awesome Greek/Mediterranean place that served really good Gyros. We walked around the GG Park and went through some of the nice trails. In the photo here, this is me by one of the kewl ponds. Hey Matt (from Michigan), there are ducks in this pond!

So anyway, Mark Andrew and I spent quite a bit of time just walking around and talking. It was a nice conclusion to the weekend trip. One of the really kewl things that I saw at the GG Park was the gathering of people to beat their drums, dance to the tribal rhythms, play their harmonicas and strum their ukuleles. I call it the Congregation of Bohemians - which I will hopefully get around to posting more specific thoughts about in a future post.

When the time came, Mark Andrew and I took the Muni (bus) back to the hotel to get my bags, then we took the BART to Oakland and he dropped me off at the airport. I was back in Long Beach, CA by 10:00 PM.

The entire trip was awesome and it was a great first leisure vacation for myself. I look forward to future travels! Now, a week has passed since returning from the trip and it's been a crazy busy week at work.

I seriously need a vacation!

I'm so glad you had a great time in San Fran, Eric! You are sooo the true catalyst and inspire others to do so!! I'm glad things are going for you even if you lost some stuff on your comp! Minor incidents like that happen to the best of us to remind us of how lucky we are!!! Think of it this way... at least it wasn't your car or your life!
Hope you had a good week! I'm glad you could make it out last weekend! Your the best!
God bless!
Take Care!