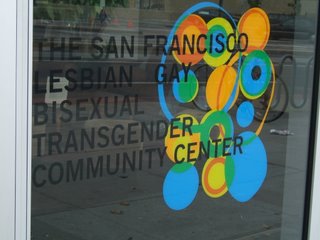 In addition to site seeing during the trip, as well as connecting with other friends, I also wanted to do a few things related to our work with Catalyst. I wanted to make some observations, draw some comparisons, and ask some questions about SF GLBT culture.

So before we went off to meet with the other GCN'ers for hiking at Angel Island, we first took a tour of The Center first thing in the morning . . . . 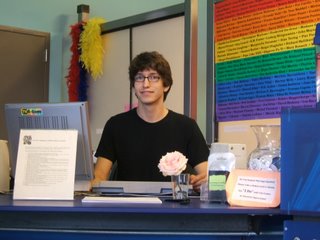 The first thing we did was meet up with Stephen. He's the kewl guy that gave Michael and I the tour. He works part time at the front desk. I called him a few days before to inquire about a tour and he said that he'd be happy to show us around. =)

So he started off taking us around the four story building, showing us the various community resources that are available, the coffee shop that they've partnered with next door, the office space that numerous other community organizations utilize, the computer lab, and the very interesting artwork displayed throughout the whole center. I was actually quite impressed with everything they had there in comparison to The Center here in Long Beach. Naturally they have more resources in SF than LB does. 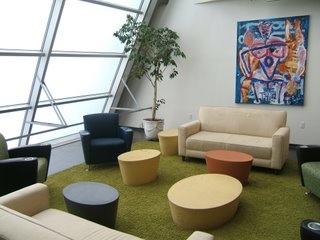 One particular thing that they have that I was impressed with was the SNAP! - the San Francisco Newcombers Assistance Program. This kewl program connects a new resident to SF with a new buddy to show him around the area, find social activities and workshops, and to help establish friendships. I think it's just for gay or bisexual men (at least that's what the brochure says). They also help orient the person with information on employment, financial security, food & dining, housing, human rights, legal stuff, mail, parenting, utilities, veterans, counseling, healthcare, HIV/AIDS, substance abuse, violence prevention, gyms, spirituality, sports, arts, bars & clubs, sex clubs, social organizations and politics. Whew! I really like the concept of helping GLBT folks getting oriented with the city - whether new or long time residents - and so I'd like to explore how Catalyst can do this in Long Beach. In fact, I wonder if our Center has anything like it. But as far as I know, it doesn't so here's a need that Catalyst can potentially fill! 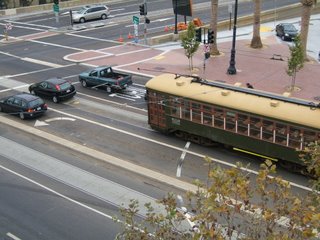 Stephen took us to the fourth floor and we hung out for a bit on an outdoor patio area that overlooked the city. It was pretty kewl actually! After asking about the Center, I asked him a little bit about the GLBT culture in SF. An interesting similarity that I found (from what he told me) was that, just like Long Beach, there are some G-L-B-T's that don't understand the other different G-L-B-T's. There are some circles that mingle with other genders but for the most part there is a lack of understanding about individuals who are different. That's something I'd like to strive to improve in LB over the next 30 years!

Another interesting thing that Stephen told me was that they have an actual San Francisco police officer that patrols that area and even has a spot behind the front desk. It was interesting to see a positive relationship that the Center has with the police department. A funny story Stephen told us was about the time a police officer brought a gold fish in a cup that was left at the front door (kinda like an abandoned puppy or kitty). They named him Lucky and put him in a fish bowl at the front desk. Lucky got sick and lots of people at the Center huddled around his bowl daily to talk to him and help nurse him back to health. We got to see Lucky and he's swimming around quite strong nowadays! 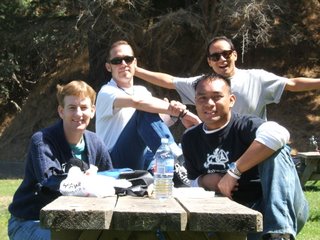 After visiting The Center, Michael and I left and met up with Mark Andrew, Edison, our friend John, and also Brad. We're all on GCN and it was fun to all meet and spend time with each other. We met at Fisherman's Wharf to take the 11:30 a.m. ferry to Angel Island. It was a longer ride across the Bay as compared to when we went to Alcatraz the day before. In fact, we stopped by Alcatraz, then moved on to the other side of the Bay, then to Angel Island. It felt like a mini cruise! 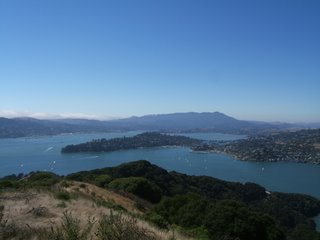 By the time we got there, we all had lunch, chatted for a bit, and browsed the visitors center. Apparently, this guy named Ayala discovered the Island around the 1700's. He was a Spaniard and a devout Catholic and that particular day happened to be something like the day of Angels or maybe the day for the Angel of Lights or something like that. I don't remember the full story but that's sort of why it's called Angel Island. Also I learned that during the Civil War, the Union army built defenses there because they were afraid the Confederate army would come up along the West Coast to get the gold and silver that had been discovered in San Francisco and Sacramento. The Confederates never did go up there, nevertheless, there was a Union presence on the West Coast at Angel Island during the Civil War. Interesting. 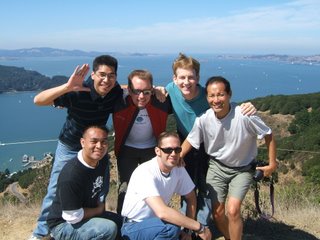 So we all went hiking up the trails - all the way up to the top of the mountain. There were some pretty awesome views! On the way up, we decided to take a group photo and some in our group decided to break out in song - musical style! Yeah, the other hikers were quite entertained by the gay boys.

In this pic, we finally made it to the top! It took us a little over an hour to get there and after some time of enjoying the view, we made the trek back down. It was a great work out that lasted most of the afternoon! 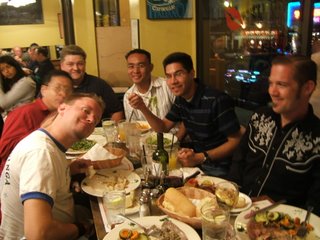 Once we got back to San Francisco, we decided to drive through China Town and Union Square downtown. It was really interesting to see the diversity of people in this area of San Francisco. We eventually made our way back to our hotel room and we took some time to rest. Then we all got ready to go out to dinner in North Beach to meet up with more GCN'ers. We went to this Italian restaurant called Steps of Rome that had really cute (seemingly gay) food servers that flirted with the ladies and even did lap dances for those celebrating birthdays. As fun as it was to watch the eye candy, the service wasn't that good. We had a reservation for 10 and the place was packed when we got there. We had to wait around for the cute waiters to put together some lop-sided tables and any available chair that they could find to cram our party of 9 into a space that would normally fit maybe 6 comfortably. The food was so-so and for some reason they couldn't make the mixed drinks we initially ordered so we had to choose different ones. They also played really loud music so it was pretty difficult to hear each other's dinner conversation. This place was more like a night out in Cancun during Spring break. Regardless, it was still a fun atmosphere. 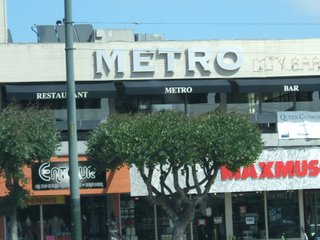 After dinner, we ended up going to Castro to hang out at a bar called Metro. Eventually, we moved on to a dance club called Cafe which was extremely packed with people. On the dance floor, we were literally shoulder to shoulder and so it was very difficult to dance. Hanging out in the Castro area was fun in general - just being with friends - but overall, it wasn't a very spiritually edifying experience.

The day as a whole, however, was very interesting as we saw the Center in the morning, saw Angel Island and views of the Bay area in the early afternoon, saw the downtown marketplace in the late afternoon, then saw the city night life in the evening. Michael and I got back to the hotel for bed time at almost 4 a.m. It was a long and full day but definitely fun times!

Stay tuned for Day 4 of meeting TWC readers, visiting churches, and checking out the leather boys at the Harrison Street Fair!

Aww, a guy I met on public trans snuck me into Metro for a drink while I was there (I was still 20 then). Looks like you are having a good time! :)