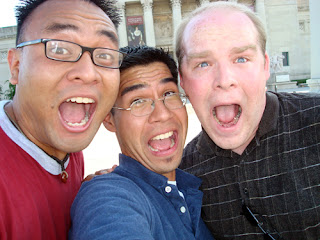 We finished our first couple days of our lil' Road Trip Adventure through the MidWest and it's been fun so far! We arrived in St. Louis on Tuesday late eve on Aug. 21st and we stayed until Friday noon on Aug. 24th so that means we had all of Wednesday and Thursday to site see, relax and play.

As we make our way on this trip, we're sampling pizza along the way - so stay tuned for a future separate post on "Pizza Wars" - the quest for the best pizza in the Heartland of America. Ha, okay, so maybe it's a bit unofficial and won't make the Food Network but hey, i'll review and recommend some of our fav's that we've discovered.

Aside from the pizza, we also saw some fabulous sites, interesting people, took tons of pics (see link below) and oh yeah, I met a hot guy in the restroom . . . . 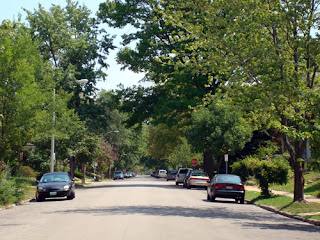 Ah St. Louis! The thing that I loved about this city were the neighborhoods. There were trees everywhere! Remember, I'm coming from Southern California where you have to drive out an hour and a half to see a tree larger than your house. In St. Louis, it was amazing to see how the trees branched over the streets. It was green. It was peaceful.

The homes had character too. Most seemed built out of brick and I was jealous of the fireplaces that many of them had. Although I hear that most people have to run their air conditioning 24/7 because it's otherwise crazy hot. I said in my last post that it was humid. I take that back. It was just warm and hot all the time. 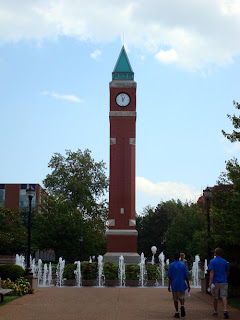 Michael and I are good friends and we've taken a number of trips together. In St. Louis, we were hosted by a friend of ours, Ron, who showed us around town the best he could. (Thanks Ron!) He had just moved there from Seattle, WA a week ago because he's in a doctoral program at St. Louis University (SLU). He showed us around campus and I was pleased to see that it was a very well maintained campus with clean grounds, nice landscape, interesting statues, and hot students - oh my gosh the guys there are so cute. Sigh, and straight too, most likely. But still.

It was actually kinda fun to see undergrads moving into the dorms with the help of their parents. I've never lived on campus so the sight of seeing "move in day" with students and parents hauling boxes and furniture into the dorms from out of their vehicles and U-Haul trailers was something i've only seen on TV or the movies. I think it would have been fun to live in the dorms (had I been able to afford it at the time) so that I too could experience loud music from the neighbors across the hall at insane hours, having to share a room with a weird guy I had just met, eating expensive cafeteria food that isn't quite fine dining, and trying to navigate the social hierarchies of a system much bigger and more intimidating than high school.

Actually, it sounds bad, but I really would have loved to experience the dorms during the "college years". Right after high school, I went to a university but I still lived with my mom and so had to commute. I did join a co-ed social fraternity, worked on campus, and was involved in numerous clubs - but the dorm experience would have topped it all off! Oh but it was fun hanging out with a frat bro who did live in the dorms. (No, nothing happened. Probably could have. I was too deep in the closet to have had the courage.) That's okay though. My college journey was mine, even without being in the dorms. But I digress . . . . 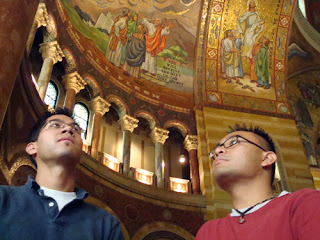 Apparently SLU is a Catholic university. I didn't know that. We checked out St. Francis Xavier Catholic church (near the campus) which seemed nice enough. Michael thought it was actually a "School for Gifted Youngsters" but I told him I didn't think St. Francis was Professor X. Afterwards, we went and saw the Cathedral Basilica of Saint Louis. Now that was an impressive structure. It was grand and regal and actually quite inspiring. As someone who's expression and lifestyle of faith is pretty organic, I enjoy seeing institutional structures. I'm just not impressed with having my faith governed by them. But artistically, I love them! 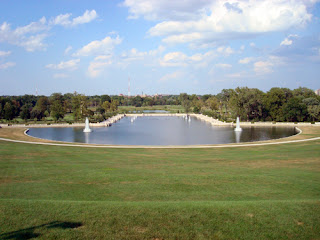 We made our way to Forest Park. Pretty big park. I guess it compares to Central Park in NY. We needed our GPS to navigate out!

There was this awesome statue of St. Louis riding a horse on top of a hill. I always feel so free when I see huge lawns and hills of grass. I walked through it barefoot too! Ah, to be on vacation!

The park also has several museums and touristy type stuff. We went to the planetarium which was kinda cool because I enjoy star gazing, except for the fact that I fell asleep during the cheesy cartoon super hero constellation show. One cool thing, though, at the planetarium was seeing a replica of Space Ship One. That's the aircraft that won the Ansari X-Prize - a competition to build a space-worthy craft. I wrote a paper about it in school. 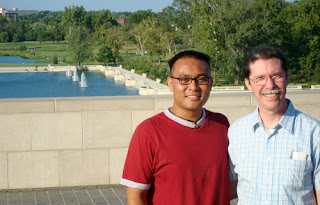 We met up with a friend and fellow GCN'er, Bill, who lives in Missouri a few hours away from St. Louis. He took time off work to come out and so we all spent our vacations together! It was fun hanging out and getting to know him for a day and a half.

Bill is someone with an incredible heart and has been committed to praying for so many people, including myself, in the GCN global online community.

We also took some time to check out the Missouri Botanical Gardens which was quite nice. I enjoy going through gardens, not necessarily because of an interest in botany or plant species but because I find it relaxing and peaceful. We had a good time strolling through the huge garden landscape, taking our time chatting and telling stories. 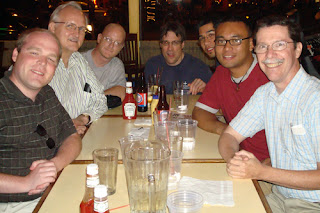 We also met up with some other local GCN'ers for dinner at a restaurant called Blueberry Hill. We had a good time reconnecting with some that we hadn't seen for either a few weeks or several months at the last GCN conference. I also met one for the first time. It's always interesting to hear different people's stories and about how various "gay Christians" are serving the Lord in their community or in their lifestyles.

While here for dinner, I noticed a rather attractive guy from across the room and while in the restroom to wash my hands, he happened to be in there. We struck up a conversation (yes, right there in the restroom) and I discovered that this incredibly hot guy was also incredibly friendly! His name was Elliot and he suggested some good places to go to while visiting St. Louis. He told me about Central West End which has some good "night life". I found out afterwards that this was a very gay-friendly area. Boy, if I knew that, I may have asked him out for a drink when he told me about it! Sigh, missed opportunity! It's okay, i'll likely never see him again. But it was a fun conversation.

During our last evening in St. Louis, we wanted to go see what the gay night life was like so we went to a bar/club. Since it was a Thursday night, it was pretty dead. We didn't get there until after midnight and it was also cowboy night. We ended up going to another club called Complex and it was pretty dead too except for a few more people there. The dance floor was empty so Michael and I danced. Eventually, Michael sat down (it was a long day!) and so I just continued dancing on my own. Other people started dancing too and it was fun to just let loose, close my eyes, listen to the music, and just move. 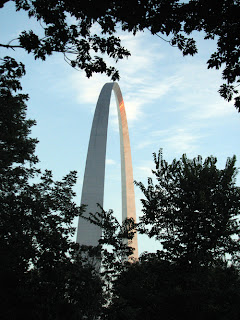 Before the club, we went and saw the Arch. This was an impressive piece of architecture built to represent the gateway to the West as the U.S. expanded into new territory. In many ways, I've gone through a gateway of my own - chronicled on this blog. I have been thinking over the past several days that I am happy where I am at in life because of this journey that I'm on. Regardless of the drama that is happening at work, I don't feel led in my spirit or by His Spirit to leave just yet. I enjoy being able to do event planning and logistics. I also like the fact that I don't have to invest enormous energy staying in the closet or mentally managing who knows and who doesn't. I can just be me. I'm also content with my faith. It's in tact. I feel like i'm living it out while at the same time acknowledging my short comings and trying to be better. There are definitely things in my life that aren't completely done in faith but God's grace keeps me humble. I'm also content with my friends and the people God has put in my life. And I'm thankful for how God is using me in this world, my community, and in my sphere of influence. I'm happy about alot of things despite a few of life's road bumps. I hate to paint such a rosy picture because it's not all perfect. I guess, for today, that's just what i'm choosing to focus on at the moment. Gratitude.

In 2005, I began a journey of reconciling my faith and my sexuality. I stepped through that gateway Arch and the view from up there has been awesome!

If you'd like to see tons of other pictures of the St. Louis leg of our road trip, check them out here in my facebook album!

Email ThisBlogThis!Share to TwitterShare to FacebookShare to Pinterest
Labels: GCN, My Journey, trips

I really enjoyed our time together Wednesday and Thursday, Eric! Your photos make me nostalgic and it's just been a few days! Thanks for sharing your vacation time with me.

Hope the trip is going well and you're keeping an eye out for the very changeable Midwestern weather!