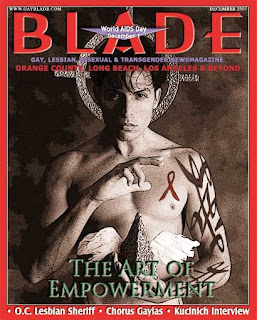 Since I hadn't been blogging for several weeks, I don't remember if I told you that I'm now a contributing writer for a local gay news magazine called the Blade. It's primarily a print mag but they recently launched a still-developing Web site to post their content.

So I thought I'd start sharing with you some of the stuff I've been writing for each issue. Plus you can check out other articles too (if you happen to be interested in some local scoop).

Here's the December 07 issue with my first two articles:

"Latino Men on Display in the OC" is about an unconventional men's beauty pageant.

"Men Chat to Help Each Other Grow" is about a local men's discussion group.
Posted by Eric at 10:16 AM

Email ThisBlogThis!Share to TwitterShare to FacebookShare to Pinterest
Labels: The Blade

And you look GREAT on the cover too :-P

Great seeing you the other day. I am so thrilled by the writing you are doing. How cool is that!

I watched all your youtube videos and loved them, and it's exciting to see you writing for Blade. I'm very proud of you and all your efforts. It's inspiring to me.