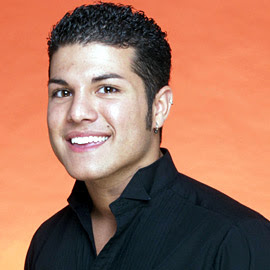 I have a confession. I pre-judged RJ Helton unfairly.

He was a guest at last weekend's GCN conference in DC and I wasn't exactly one of the guys fawning all over him. Honestly, I had never heard of him before. The only thing I knew was what others had been saying "about" him - something about him being on American Idol season 1 (which I never saw), him being gay (which seemed evident), and him being caught with his pants down at a club. Actually the rumor I heard was that a photo was taken with his pants down showing his underwear but I think the context was that he may have been "pants'ed" by a drag queen? while he was performing a song.

The point is that I . . . . formed my whole image of who this guy is based simply on things people said about him. So when the time came to see him, I didn't give him a chance. In fact, I didn't even go to his concert (except for peeking in for literally two minutes out of curiosity). Then as the conference progressed and people who liked him shared about how they were touched by him, I felt pretty indifferent about it.

Then it came time for everyone at the conference to share their experiences during an open mic session that lasted three and a half hours. RJ was asked to sing a song and before doing so, he shared from his heart about what was going on inside of him. He began to share about how much it meant to him to have so much love from all of "us". Yeah, Gay Christians. He said that it was because of his interaction with many friendly people at the conference, he had finally begun looking again towards a God who loved him. He cried and cried and people cried and cried and then he sung an (honestly) amazing song.

I realized, then, that I'm a schmuck. I hadn't given him a chance. And even IF the things I assumed about him were true, who am I to judge him and to not give him the time of day or to even listen to him sing one full song? God touched his heart and drew him back to Himself by using gay Christians at the conference. And I wasn't one of them because, what?, i'm too good? Not at all! I was so set on not being impressed by his celebrity that I didn't allow myself to be impressed by his heart.

Lord, forgive me for judging RJ Helton harshly and for not demonstrating or expressing Your love towards him. To RJ, (doubtful he'll read this), while I never spoke to you in person, I'm sorry for being a prick - in my heart towards you. I pray God's continued blessings for you. I don't want to miss another opportunity to serve God because I wasn't paying attention to who He was loving at the time.

Gosh, I feel like the mainstream Church who are clueless about the fact that God is loving His gay people. Ouch.

Email ThisBlogThis!Share to TwitterShare to FacebookShare to Pinterest
Labels: GCN

hey eric, i am an an RJ helton fan and i would have loved to have the opportunity to meet him in person yet alone go to one of his concerts.(he sings like angel) i have never heard of him being pants'd at a gay club nor have i ever heard of him being gay. i guess i don't have much of a "gaydar" huh? anyways, if i had known he was gay or heard about those rumors going around about him, that would not have changed my mind about him in the least bit. eric, i am glad you gave him a chance and you did exercise christianity. you of all people know what it's like to be judged. it is easy to judge someone but it's harder to let that person you've judged into your heart and set that judgement free. let this be a lesson for everyone who has judged for all the wrong reasons and ask yourself "what would Jesus do?" i still love you 'lil bro, your sister leilei.....=)

hey lani! thanks so much for the comment! i appreciate it! yeah, i'll admit that after hearing him, he does have a nice voice. and yes, you'll have to get your "gaydar" tuned.

after everything, RJ told GCN that he's looking forward to working with GCN again in the future. perhaps that means singing again? dunno. but you know sis, next year's GCN conference will be in Southern California! maybe you'll get to meet him. =)

"it is easy to judge someone but it's harder to let that person you've judged into your heart and set that judgement free."

I love you Lani. Thanks for being part of my blog!

If it's OK with you, I am going to pass this on to RJ. I think that it would do his heart good to read this. I too, struggled with what to do about the whole pants thing...but I prayed about it and after talking to him, I KNEW that God wanted him at this conference. I knew that his story would help people, but I didn't realize just how much this whole experience would change him. Thanks for following your heart and listening to God.

I want you to know, Eric, you are one of my hero's. I'm not going to go into it, just know that I admire you more than you will know. Look for an email from me soon, as I need to ask YOUR forgiveness about something. God is working in our community, thanks for being one of the most important vessles out there.

In HIS Grip,
Dennis

oops...sorry bout the spelling...hero's should be heroes.

Eric.
I missed most of his concert. I just didn't feel particularly interested, but I went down and caught the last couple of songs. I noticed that he does have a very wonderful voice, though he doesn't sing in a style that I am all that fond of (the pop "melismatic" style with each syllable getting multiple notes). I immediately sensed the Holy Spirit in the room and knew I'd missed out on something. And through the rest of the coference, hearing the way people were ministered to by God through him that night, and the way he had been so authentic with the room, and then hearing how transformed he was, I kept thinking, "oh boy, I wish I'd been there for the whole thing".

A: I love RJ Helton - always have
B: I wish I could've been at the conference this year (for many more reasons than 'A' . . . )
C: I still love your blog, still love your ministry, and am so happy that you continue to work toward equality, acceptance, and understanding!
D: Apparently, I love the alphabet.

Hope you are well, my friend!