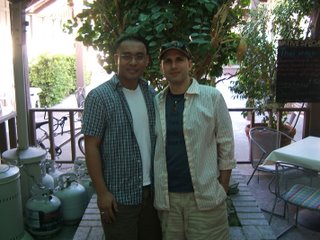 Today, I drove out to Palm Springs (about 100 miles inland from Long Beach) to connect with Peterson Toscano. I've mentioned him before in this previous post. He was there for the weekend doing his show "Doin' Time in the Homo Nomo Halfway House" for the Love Breaks Out conference. He's from Hartford, Connecticut and so seeing as how he was in the region - we thought it'd be fun to try to reconnect.

He took me to a vegan restaurant that he discovered there and I thought it was pretty good. The chocolate tofu was tasty as well!

. . . . we talked about projects that each of us have and will be working on in each of our ministries/organizations. I sincerely respect Peterson's creativity in the way he unpacks an issue and creates discussion about it. It is clear that God's hand and heart rests on him. =)

Something interesting that I learned from Peterson is the concept of silence in prayer. Of course, I've heard of being silent while praying but he tells me that as a Quaker prayer is done in silence. I can see how refreshing that can be - "Be still and know that I am God" (Psalms 46:10). I asked him today if the silent prayer is more like just thinking the prayer rather than speaking it verbally or if it's more like clearing the mind and not saying anything. He said that there are instances where it could be both but most of the time it's clearing the mind and trusting that God already knows everything that we would like to say or ask Him. So it's more about listening and receiving from Him. The analogy Peterson used was that it's like when Jesus was entering Jerusalem and people were waving the palm branches but when He passed in front of them, the people bowed and laid their branches down on the ground in his path. He said it was kinda like that - being silent is like stopping everything (even in thought) to bow before the King. Whoa! That's huge! I'd definitely like to incorporate that into my lifestyle. Now that's a wonderful birthday gift! =)

After our vegan lunch, we proceeded to the Botanical Gardens there in Palm Springs to see the showcase of desert plant life. There were lots of alien looking cactus creature thingies. Interesting. It'll be fun to reconnect with him again in the future.

On my way back home to Long Beach, I stopped by Riverside to visit my mom for a couple of hours. She had surgery this past Friday and I wanted to check in on her. She had her gall bladder removed (and while they were in there, they took out her appendix too). I suppose she's fine. She's got some pain and discomfort but the recovery time should be about a month. I'm hoping she'll feel well enough to join the family at my brother's for Thanksgiving. Would you please keep her in your prayers? Thanks!

I met mr Toscano six weeks ago and we talked about worship and it made a huge impression on me and it changed my lifestyle as well. It is a powerfull way to get before God I think. At least it is a way that really changes me.

I will pray for your mothers recovery.