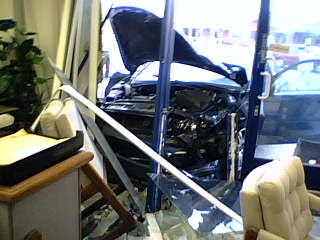 So a crazy thing happened at the job Thursday morning. I was the first one in to work and began my routine of opening up the office. I turned off the alarm, turned on the photo copy machines, turned on the lights, turned on my computer, went to the front and opened the window blinds, unlocked the front door, stepped outside to grab the newspaper, went to the back of the office where the staff lounge is and sorted out the newspaper while preparing my morning oatmeal and banana.

Then I heard a car crash. We've had car accidents in front of our building before so I thought no big deal. Then I heard a second and much louder crash.

I left the staff lounge, turned the corner, and looked into the front office where I was just two minutes before when I unlocked the front door and opened the blinds. Lo and behold, I saw a steaming blue volvo where the front wall and door used to be. 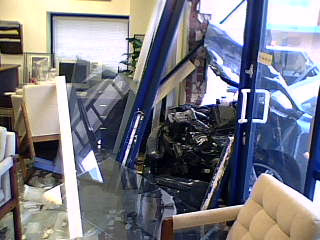 Apparently two cars collided which sent one of them smashing through our front lobby. My desk faces the front door behind a counter. Had I been sitting at my desk, I would have looked up and saw this car heading straight at me! I can only imagine the shock of what it would have been like. Fortunately, I was neither at my desk nor in the front lobby at the time.

The funny thing is that when the fireman said that he was sorry that this had to happen at my work place, I told him that this was nothing compared to the kind of craziness that normally happens in this office.

Email ThisBlogThis!Share to TwitterShare to FacebookShare to Pinterest
Labels: work

YIKES! Yeah way to much drama for work. Phew, glad you are okay and I guess the driver is too?

Thanks for the dramatic photos

Scary indeed. A week after I moved to DC a car crashed into the lobby of our building. Glad you're ok.