As much as I could, I tried to be friendly and introduce myself to people I had never met. I would hope that I am an approachable kind of guy - sometimes it would appear like I'm always busy or always on the move or always around people but really I enjoy connecting with people. Being an introvert, I took some time every now and then to rejuvenate on my own by sitting alone to take a breath before plunging back in to the crowds. Being social really is a choice for me and I try not to let being an introvert become an excuse not to talk to people. I'm genuinely interested in people and since I have no other agenda except to know people and to let them feel valued, it's easier for me to be that "social butterfly".

I'm really glad that several people throughout the past three days sought me out and introduced themselves to me just to say hello and thanks for TWC. I felt like there was a mutuality to my experience here - both I and others were making an effort to meet new people. I had some really awesome and lengthy conversations, heard a great keynote from Jay Bakker, led a workshop i'm happy about, and heard some awesome tear-jerking stories from conference-goers . . . .

At the beginning of the day, the first keynote speaker of the conference was Jay Bakker. I was touched in so many ways as he talked about the death of his mother Tammy Faye, other issues with his own family, and the hurt he felt from friends for being a straight advocate for gay rights. He's such a big name here that people often fawned over him. I'm not the type to stalk celebrities because I don't want to come across as "one of those fans" so I tried to respect his space and distance. I imagine it can be overwhelming at times and I'd rather just be normal. So I went to the elevator last night and saw him trapped in it by a guy holding it open just to talk with him and I was like "oh no, one of them!" So when the guy finally released the door, I laughed and Jay affirmed being held hostage. I introduced myself and we were both friendly. I don't think any of us left the elevator scared. LOL

In the afternoon, I led my second workshop on "Catalyzing Tangible Community in Your Local Area" and I was very pleased with it. I got to share my heart and my approach to working with groups and I got to offer practical tips for them to catalyze their own local groups. I got tons of great feedback from people who found the workshop very helpful so I'm looking forward to staying connected with many of them who want to continue the conversation and bounce ideas and questions off me. I'd love to do this workshop again! 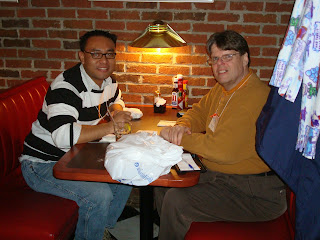 I had an incredibly refreshing dinner conversation with a new friend named David. As many of the conference-goers went to dinners in large groups, David and I decided to deviate and have a more quiet meal together in our own booth. I found David fascinating as he told me his story. He's clergy and gay. He's Side A celibate and leads to an independent Catholic parish - two things that I had never heard of before. Maintaining a Side A perspective, he does believe that it's okay to be gay and that all people (both gay and straight) are to have healthy romantic relationships. However, he feels personally called to celibacy. I find that fascinating! He also told me that there are many independent Catholic parishes that are no longer connected to Rome. Many of them keep relations with other independent Catholic parishes and it was awesome to hear how they support one another and even develop their own accountability system among trusted fellow clergy. I found so much in common with David and I learned so many things that I had not known before. He truly was a blessing! I'll be staying in touch with David.

Last night's conference session was a sharing time - an open mic to give conference go-ers an opportunity to share what's on their hearts, what God has been revealing to them, some of their story, and who has touched their lives at the conference and during their journey. This is my third conference and it's always amazing to hear how God is actually using GCN to impact so many lives. It last three and a half hours and concluded at midnight!

Another awesome conversation that I had was with Ross of In Lay Terms. He came to the conference as an invited guest as someone from Lutherans Concerned - an LGBT organization for Lutherans. He's also a co-director for The Naming Project - an LGBT youth organization. He had been spending much of his time talking with various people about one of the upcoming conferences he's connected to so, like me, he was always around people. I mentioned to him at some point that I wanted to talk with him later during the conference to hear his "schpeel and his schory (story)" - to know more about the conference, his organization, and his story. It seemed we could never get together during the meal breaks or in the hotel lobby so I figured it'd never happen. Plus, I thought, with all the people he's talked to, that he didn't remember me anyway. Until last night he went to look for me! I'm glad he did because we ended up talking all night (morning) from 1am - 4am. It was fun because we mutually shared our hearts and passions and vision for things we're a part of. We're similar in tons of ways and it was fun just to have one of those natural kind of conversations where every time we realized it was late and would have wrapped up our time we'd end up talking about something else and talk for yet another hour. I'm looking forward to keeping in touch with him!

I've met tons of awesome people here, many of whom I'm looking forward to staying connected with!

I kept getting emails from a friend telling him of all of the people I knew that he was running into. I had no idea I knew so many people there! Maybe next year I will have to go. Glad you had a good time!