Back From The Bay Area 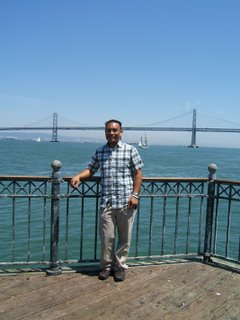 I'm back from San Francisco and I've gotta say that I really liked the Bay Area. I didn't get to see all that much but from what I did see, I had a good first impression. Leaving Long Beach to get there was a different story. I left Tuesday evening (scheduled to depart at 8:20pm so I got there at 7:15pm) and that was the day that some kind of something crashed into some other thing that knocked out some important thing and resulted in shutting down every Southern California airport for several hours. (How's that for accurate news reporting?) I ended up flying in to SF and getting to my hotel by 2 a.m. . . . .

The training for work went well. I'm excited about getting into the routine of work because I now feel equipped to do my job. I'll be utilizing a Web-based software application and I feel confident in using it. There's always that learning curve whenever a person starts something new and so naturally there's that mix of excitement and anxiety. I'm looking forward to doing what I do well so that I can demonstrate my potential. The other cool thing was that, just as I mentioned before, I was able to not deliberately hide the fact that I am gay. My boss came with me and as we got to know each other I was able to talk pretty casually and openly about myself unapologetically. She's cool with it all.

Since the training was primarily during the day from Wednesday through Friday, I got to see a little bit of the city. I didn't see a whole lot, so i'm hoping to go back possibly during Labor Day weekend (maybe!). On Thursday night, I met up with my GCN friend and he took me to see the Castro area or district or whatever you call it. We went to this really kewl place called Cafe Flore - it was a combination restaurant, coffee shop and bar. I really liked the atmosphere there. It was very comfortable. We walked up and down the street and went dancing at two different clubs. One of the things I was keeping an eye out for was making a comparison between Long Beach, West Hollywood (WeHo), and Castro in SF. From what I perceived, I felt like there was alot less "attitude" in Castro than there is in WeHo. People seemed alot more comfortable and relaxed and laid back and even kinder as compared to WeHo. It was easier to approach someone and have a friendly conversation. I was also surprised to see how ethnically diverse San Francisco is in general - throughout downtown but also at the Castro's clubs. I thought that was kind of kewl. After dancing, my friend took me up to a place called Twin Peaks which overlooked the city. I always like seeing city views like that. It was foggy because it was 2 a.m. by this time but it was still pretty nice seeing all the city lights and stuff. Fun times.

On Friday, the training ended early so I went off on my own to try to see the Golden Gate bridge. I didn't have much time because I needed to get back to Oakland to reunite with my boss and get to the airport and I didn't want to hit the afternoon traffic. I didn't get to go to Golden Gate Park but I was able to find a place to park and walk along the street where all the piers are and I went on a pier that had a great view of the Golden Gate bridge. I really didn't want to leave SF not having seen it since it's such a landmark of the city. Yep, that's me in the picture above on the pier with the bridge in the background. It turned out to be a great day in terms of weather to be out in SF.

I guess going in to SF, I somewhat expected to see a "gay city" with a lot of freaky looking people. After driving around and seeing the downtown area during the day time and after seeing the club life at Castro in the evening, I realized how much I kinda pre-judged SF beforehand. Everyone that I saw in SF looked completely average and normal. In fact, compared to WeHo where you'd typically see the "skinny beautiful blonde and blue" eye candy (both guys and girls), SF people really did look average - and that in itself was attractive. I remember thinking that I (and so many other people in the Church) had/have such a preconceived stereotype of San Francisco and it's easy to judge it like it deserves to be covered in fire and brimstone. But when I saw it for myself, I realized that I was ignorant for thinking that. Just like when I saw the gay community in Long Beach for myself, I realized that God was there and that I was ignorantly prejudging the community. That's what makes me want to see the world for myself - with my own eyes - so that my paradigm and stereotypes can continue to be shattered. And it makes me think that all those people who say such hateful things about gay people (or even well-intentioned condemnation from nice people) just haven't met enough gay people and gotten to know them to see how awesome and kind and loving and genuine and real and "normal" we are. It's easier for them to keep their eyes closed with fingers pointing while imagining that the few extreme examples portrayed in the media represent what the entire community is like. I think they need to go out and see the very people they are condemning, look them in the eyes, then look at their whole life, and then try to judge and condemn them. They pray (prey) against a people they don't even know. I pray that God's love would be demonstrated to them through a gay, lesbian, bisexual, or transgendered person so that their paradigms would be completely shattered!

Anyway, where was I?

I'm really looking forward to coming back again to see more of the city. This was huge for me because this was my very first time going to San Francisco and so I was super excited. Some friends are planning on going up during the Labor Day weekend so i'm going to explore the option of me going as well. I've decided that I want to be more intentional about traveling - going on vacations and seeing the world outside of Southern California. I haven't traveled much and I feel like I missed out on alot of fun during my 20's. I always came up with some kind of excuse - i didn't have money, i couldn't get away from the job to go, i can't take time off from the ministry, i'll go later in life. Now that I'm 30, I don't want to look back when I'm 40 and have the same regret. I want to live life, I want to experience life, I want to see life - out there! The more I see of the world with my own eyes, the more I realize how much I do not know about the world. I feel blessed that God opened a door for me to have this new job because it's stable and will give me the financial means to save up and go places. I appreciate the Lord's provision.

No fretting about the work with Catalyst though! I'm still very excited about what we're doing and I still feel like I'm able to do what needs to be done when I'm not working the job. Thanks everyone!

Uh, Eric, um, don't know quite how to tell you this, but, that's not the Golden Gate Bridge! :-) It's the Bay Bridge. A lovely bridge in its own right, though!

I'm glad you liked San Francisco. I had kind of the same reaction when I came up here after being gay in LA. I couldn't believe so many people were walking around without a tan or slick clothes. It really is different.

Hope you can come up for Labor Day and see all the sights. It would be nice to meet up with you, too.

Would love to see SF again after my brief visit 5 yrs ago when in school! Glad u had fun! Hope to c u soon!

LOL, steve, no! say it ain't so! are you absolutely sure? i was on the 101 South freeway and I followed the signs all saying Golden Gate Bridge or GGB and it took me to that.

Are you sure? LOL.

I am afraid so.

Don't feel bad, you're not the first to make that mistake!

My paradigms continue to shatter.

Very interesting impressions of SF, Eric. I had the exact same experience when I was there last year. Somehow I expected everyone to be gay and beautiful and holding hands down every street. I quickly realized SF was simply a big city full of the same people that live in every city.

Glad you had a good time, especially on your visit to the Bay Bridge. LOL

I like the way you explained how your flight was delayed. It's exactly the kind of gibberish that made perfect sense.That's exactly how I would have described it.

Next time you're here, we should have coffee...and we can show you the Golden Gate Bridge :-)