A Not So Average Brit

I understand being underestimated. I know what it feels like to have somebody take one look at me and be completely unimpressed.

Until, that is, when I begin to function within my element and, to their surprise, I absolutely kick ass! How do you like THEM apples!

I say that humbly, of course.

I was the guy who was picked last for basketball or football. I was the one who never made the cut. Perhaps this is why I love rooting for the underdog. 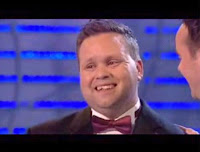 Behold, Paul Potts, a 36 year old average looking British cell phone salesman doing his rendition of Nessun Dorma in a talent competition that completely changed his world. According to IC Wales, he sang his first opera when he was 28 years old. And now hear him go!

It's not just his singing; it's his story that I find fascinating. Earlier this week, Matt Lauer interviewed William and Harry, the HOT british princes of Wales. But Paul is the Brit that inspires me. He's the hero.

Thanks for sharing this clip, Eric. WOW! I always get cold chills listening to this from Bocelli...same thing with this guy. He emotes so powerfully. I hope he really crashes onto the world stage so we can hear more. Keep me posted if you find more of him...I'll have to keep an eye on YouTube.

WOW, what a post! So well presented and a perfect end to the day. Thank you. And, by the way - thank you also for coming up and introducing yourself to us at AIDS Walk Long Beach today. It was a pleasure to perform, made sweeter by meeting you.

Eric-Thanks for that post:) I love seeing the underdog win:) I know exactly how you feel:)

I hope you are well, my friend!
~Justin